The Experience WA app By Tourism Western Australia is the perfect tool for delegates who wish to explore Perth. With so many options on offer for visitors such as swimming with wild dolphins, visiting a winery or taking in a sporting or cultural event! Let the app help you choose what to do.

With plenty of inspirational spaces, exceptional natural beauty and incredible diversity, Western Australia provides the spaces to connect and a fresh perspective on business events. Basking in the warmth of a Mediterranean climate Perth is a city buzzing with a new energy reinvigorating visitors with its sophisticated style, cleanliness, clear blue skies and pristine coastline, yet the relaxed lifestyle and friendly vibe remain.

Safe and secure, Perth offers all the benefits of a large metropolitan city with an excellent range of affordable and inspirational Congress and event venue options, quality accommodation, and shopping, dining and leisure activities.

Explore WA’s Coral Coast
Looking for the most popular things to see and do around Ningaloo Reef and the Coral Coast? The towns of Exmouth and Coral Bay, sit on the World Heritage Listed Ningaloo Reef, and are the only places in Australia where you can swim with whale sharks, as well as humpback whales and manta rays. If you’d rather stay dry, no problem, eco cruises run daily to the reef, and heading south towards Perth brings you to the beach loving dolphins of Monkey Mia, and the lunar landscape of the Pinnacles.

Ningaloo Reef
The World Heritage listed Ningaloo Reef is internationally recognised as one of the planet’s last great ocean paradises. Located in Western Australia's Gascoyne region and fronting the gateway townships of Exmouth and Coral Bay, the 300 kilometre long Ningaloo Reef is the largest fringing coral reef in the world.

Pinnacles & Cervantes
Take a day trip from Perth to the other-worldly landscape of the Pinnacles Desert in Nambung National Park. Following the Indian Ocean Drive, you can stop to meet friendly kangaroos, try sandboarding and taste Cervantes’ famous seafood delicacy.
If you’re travelling between July and October, you’ll see Western Australia in full colour, as the coastal landscapes are filled with the blooms of spring wildflowers.

Australia’s Golden Outback
Unearth another side of the landscape and embark on the road trip of a lifetime by hiring a four-wheel drive and hitting the red dirt highways. Drive yourself along the Golden Quest Discovery Trail for a unique off-road adventure through our Goldfields. As you travel from Coolgardie through to Laverton you’ll get a taste of outback life. For a surreal evening, set up camp out under the stars—you’ll witness impressive formations you’ve never seen before.
There are plenty of easy ways to experience this expansive landscape and include Kalgoorlie and the Golden Outback in your extraordinary WA holiday.

Australia’s North West
The Pilbara region in Western Australia has some of the world’s most ancient natural landscapes, dating back two billion years and stretching over 500,000 square kilometres.
Deep rocky canyons lead to peaceful plunge pools in the beautiful Karijini National Park. Hundreds of islands with dazzling white beaches and untouched coral gardens are yours to explore on the Dampier Archipelago and Mackerel Islands. And yet the Pilbara is also known as the engine room of Australia - home to a massive mining industry in crude oil, salt, natural gas and iron ore.

Margaret River
Margaret River is a small town south of Perth in Western Australia, known for its craft breweries, boutiques and surrounding wineries. Beaches and surf breaks line the nearby coast, whose waters host migratory whales (Jun–Nov). Stretching between 2 lighthouses north and south of the town, the long-distance walk, the Cape to Cape Track, fringes the limestone caves and sea cliffs of Leeuwin-Naturaliste National Park.

Albany
Albany is a city at the southern tip of Western Australia. It's known for its beaches, such as popular Middleton Beach. East of the city, Two Peoples Bay Nature Reserve is home to secluded Little Beach. Albany’s Historic Whaling Station, a former whale processing plant, now houses a museum. Migrating whales pass off the coast at Torndirrup National Park, where steep cliffs give way to dramatic rock formations. 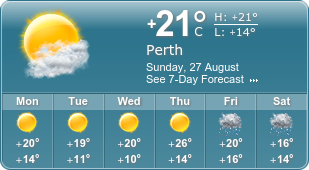